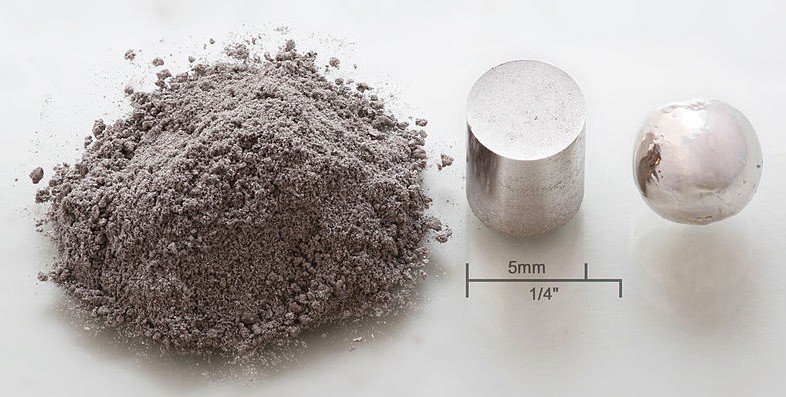 Powder compaction
Rhodium metal: powder, pressed pellet (3*105 psi), remelted
Powder compaction is the process of compacting metal powder in a die through the application of high pressures. Typically the tools are held in the vertical orientation with the punch tool forming the bottom of the cavity. The powder is then compacted into a shape and then ejected from the die cavity.[7] In a number of these applications the parts may require very little additional work for their intended use; making for very cost efficient manufacturing.
The density of the compacted powder is directly proportional to the amount of pressure applied. Typical pressures range from 80 psi to 1000 psi, pressures from 1000 psi to 1,000,000 psi have been obtained. Pressure of 10 tons/in² to 50 tons/in² are commonly used for metal powder compaction. To attain the same compression ratio across a component with more than one level or height, it is necessary to work with multiple lower punches. A cylindrical workpiece is made by single-level tooling. A more complex shape can be made by the common multiple-level tooling.
Production rates of 15 to 30 parts per minutes are common.
There are four major classes of tool styles: single-action compaction, used for thin, flat components; opposed double-action with two punch motions, which accommodates thicker components; double-action with floating die; and double action withdrawal die. Double action classes give much better density distribution than single action. Tooling must be designed so that it will withstand the extreme pressure without deforming or bending. Tools must be made from materials that are polished and wear-resistant.
Better workpiece materials can be obtained by repressing and re-sintering. Here is a table of some of the obtainable properties.
Cold compaction
Cold compaction is a process in which powder is compressed at a temperature where deformation mechanics like dislocation or diffusional creep can be neglected. Cold compressing is the most important compaction method in powder metallurgy. It starts from bulk powders containing very small amounts and sometimes even no lubricant or binder additions.
The compaction behavior of powders, expressed by their overall pressure density relations is shown in Fig 3. The controlling parameters are mainly particles size and the ability for plastic deformation. Densification starts form the apparent density, which is similar for the coarse iron and alumina powder, and which is not too far away from random dense packing for both of them. The fine powders exhibit a significantly lower starting density, due to hindered packing. With increasing pressure, the average density of the compact increases. The slope of the curves differs significantly for the ductile metal and non ductile alumina. This is due to the filling of inter-particle voids by large amount of plastic deformation. The inter-particle friction and bridging effects increases with decreasing particle size.
Design considerations
One of the major advantages of this process is its ability to produce complex geometries. Parts with undercuts and threads require a secondary machining operation. Typical part sizes range from 0.1 in² to 20 in². in area and from 0.1 in. to 4 in. in length. However, it is possible to produce parts that are less than 0.1 in². and larger than 25 in². in area and from a fraction of an inch to approximately 8 in. in length.
Isostatic pressing
In some pressing operations (such as hot isostatic pressing) compact formation and sintering occur simultaneously. This procedure, together with explosion-driven compressive techniques, is used extensively in the production of high-temperature and high-strength parts such as turbine blades for jet engines. In most applications of powder metallurgy the compact is hot-pressed, heated to a temperature above which the materials cannot remain work-hardened. Hot pressing lowers the pressures required to reduce porosity and speeds welding and grain deformation processes. Also it permits better dimensional control of the product, lessened sensitivity to physical characteristics of starting materials, and allows powder to be driven to higher densities than with cold pressing, resulting in higher strength. Negative aspects of hot pressing include shorter die life, slower throughput because of powder heating, and the frequent necessity for protective atmospheres during forming and cooling stages.


Previous:   What is a Strong Magnet? Next:  History of Traffic light