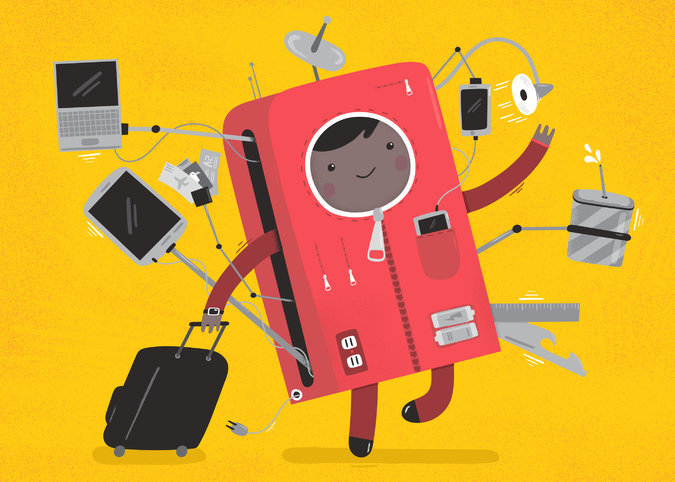 I hate my kettle.
Actually, it's not my kettle; it's my wife's. She bought it because she fell in love with its square, white simplistic design. But while beautiful, it doesn't let you know when the water is boiling. There is no whistle or automatic shut-off; it just boils and boils and boils. It's form over function, which is why I hate it.
Hiral Sanghavi feels the same way about his clothes. He is part of the husband-and-wife team behind the 15-in-1 BauBax travel jacket that has made headlines worldwide for being a "Swiss army knife" of travel clothing. Before I get into what the jacket does (and it's a lot of nifty stuff), I'll tell you how it all began.
Mr. Sanghavi, 29, was studying business at Northwestern University's Kellogg School of Management, and was flying frequently to Berkeley, Calif., where he lives with his wife, Yoganshi Shah, also 29.
During the flights, Mr. Sanghavi, a self-identified geek, lamented the fact that his normal clothes didn't have designated spots for his various gadgets, including an iPad, headphones and an iPhone 6 Plus. So Ms. Shah, who worked at a computer networking company, decided to create a travel jacket that could solve her husband's problems.
The couple sat at their dining table and sketched various ideas, cutting fake pockets out of paper, until they had a mock jacket. Then they found a manufacturer to make a prototype.
The resulting bomber jacket would not look out of place in an in-flight shopping catalog or an infomercial ripe for satire. It has individual pockets for a smartphone, passport, sunglasses, blanket, tablet, charger and, let's not forget, hands. It has special sleeves for a cup, headphones and stylus. There's even an eye mask built into the hoodie, gloves built into the sleeves, and a neck pillow that inflates like a life preserver.
The jacket was really just for Mr. Sanghavi. But they liked it so much that they decided to put the bomber jacket and four other iterations — a sweatshirt, a windbreaker, a bomber, and a blazer (for both men and women) — on Kickstarter, hoping to raise $20,000.
While the garment may not look like much — the prototype was basically a bomber jacket made of soft shell polyester fabric with lots of hidden pockets — it struck a chord with the gadget-loving, business-traveling public. It was covered in numerous news-media outlets, including CNN, Time, The Daily Mail and The Economist. It also caught the attention of fashion sites like Cosmopolitan and Refinery29.
And in early September, when the Kickstarter campaign ended, the BauBax jacket had raised $9.2 million from 45,000 people in 81 countries — breaking Kickstarter records as its most-funded piece of clothing and its fourth-most-funded campaign ever.
"It is good to have clothing that solves problems you face in day-to-day life," Mr. Sanghavi said in an interview.
You could chalk up the 15-in-1 jacket to being just a fad or a niche product. Maybe it's like the utilitarian camera vests that old-school photojournalists use in the field. Or a fisherman's convertible pants, which can go from trousers to shorts with the slide of a zipper.
"A lot of this is function scratching an itch," said John Dimatos, the director of technology and design partnerships at Kickstarter. "For someone who doesn't come from a fashion background, these are people looking at fashion from a different point of view."
Crowdfunding websites are littered with clothing campaigns where the focus is on function. Examples include the Magbelt, a magnetic belt that adjusts to every waist size; jeans that can be worn in the gym; Foot Flops, flip-flops that are heat-molded to individual feet; and the Undress, which allows women to change their clothes in public without getting naked.
There are countless trends, including shirts and T-shirts that don't need to be cleaned and never smell, bike workout gear made of high-tech fabrics, and shoes made from ultralight materials like Tyvek, which was originally used to wrap houses. (A pair of Tyvek sneakers can weigh as little as 150 grams.)
But I have a different theory: As with my kettle, consumers today want clothing that is functional, and, increasingly, that means clothing that works with all the gadgets we now lug around. That's very different from the role of typical fashion designers, for whom it's all about form.
When I showed Paola Antonelli, senior curator of architecture and design at the Museum of Modern Art in Manhattan, the BauBax travel jacket, she noted that its 15 functions are hidden, rather than part of the style. "The form," she said with some chuckles, "is hidden in the function of the jacket." In other words, fashion is an afterthought to this particular piece of clothing.
So until Alexander Wang makes a jacket with hidden headphone sleeves or Proenza Schouler reinvents the neck pillow, a young couple in Berkeley with no fashion background are happy to fill that void. And consumers, who care more about function than fashion, are happy to pay for it.