Behind the Downfall at BlackBerry 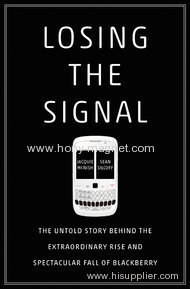 Ever since Jim Balsillie and Mike Lazaridis stepped down as co-chairmen and co-chief executives of BlackBerry, neither has spoken much in public about the once-dominant smartphone maker's fall into near market obscurity. The two and many others have opened up, however, to two reporters from The Globe and Mail in Toronto: Jacquie McNish, a senior business writer and author of several books and Sean Silcoff, who reports about the company. The resulting book, "Losing the Signal: The Untold Story Behind the Extraordinary Rise and Spectacular Fall of BlackBerry," which will be published in the United States on Tuesday, fills in some details of the early history of BlackBerry. And its later chapters offer gripping details about the emotional and business turmoil surrounding its near collapse.
Q.
How did you gain what seems like extensive access to Mr. Lazardis and Mr. Balsillie?
A.
Ms. McNish: Sean opened the door in 2013 when we were doing a long-simmering investigation into the company. Up until that point, Jim Balsillie and Mike Lazaridis were very frustrated with the common narrative and they were willing to tell a much more complex story.
At times, Sean and I felt like we were therapists. We interviewed 120 people and I think the vast majority of them have some form of post-traumatic stress syndrome.
Q.
What was their initial reaction to the iPhone?
A.
Mr. Silcoff: It was an interesting contrast to the team at Google, which was working on smartphones at the time. Google seemed to realize immediately that the world had changed and scrapped its keyboard plans.
At BlackBerry, they sort of dismissed the need to do anything about it in the short term.
Ms. McNish: One thing that they misunderstood is how the game had changed when AT&T announced its deal with Apple. BlackBerry had built its whole business model on offering carriers products that worked efficiently on their networks.
The first thing Mike Lazaridis said when he saw an iPhone at home is that this will never work, the network can't sustain it. What they misunderstood is that the consumer demand would make carriers invest in their networks.
Q.
Verizon's need for an alternative to the iPhone, which was sold exclusively by AT&T at first, forced BlackBerry into the touchscreen business. Why was the result, the BlackBerry Storm, a technical and sales disaster?
A.
Mr. Silcoff: Verizon presented them with a very tight deadline to deliver a touch screen. It was very early times for touchscreens and it wasn't clear that the iPhone would end up as the model for the market.
Mike Lazaridis hated typing on glass, so he came up with a new vision for glass that required users to push on it. That combined with the deadline and an inadequate operating system meant that there were a lot of long odds going against BlackBerry.
It was their biggest order ever. But when the Storm came out late and buggy for Thanksgiving 2008, what they hoped would be the next big move was disaster for the company.
Ms. McNish: One of the big reveals for us in the book was the enormous power wielded by carriers in the smartphone race. Verizon pushed BlackBerry to deliver its touchscreen Storm phone in little more than a year and when the rushed product failed, Verizon demanded $500 million to recover its losses. BlackBerry balked at the big ask, but in the end shouldered more than $100 million in repairs and other benefits.
In the wake of Apple's ascendency, carriers have seen their clout and economic value significantly diminished as customers spend more of their smartphone money on Apple phones, apps and other content than they do on carrier bills. It is one of the greatest wealth transfers in our generation.
Q.
Although it was phone purchases by consumers that brought BlackBerry to its peak, did the company ever understand that segment of its business?
A.
Ms. McNish: David Yach, the former chief technology officer, said that he learned in retrospect that beauty mattered, fun mattered. That was so antithetical to BlackBerry. It was aimed at efficiency, security and all the practical things people in the biz world want.
Q.
What do you see for the company they left behind for John Chen, the company's current chief executive?
A.
Ms. McNish: Their biggest investor is a long term player — they are not looking for a quick fix.
And they have time, in part because of BlackBerry's legacy of very prudent fiscal management.
Mr. Silcoff: John Chen has a tall order on his hands. Their revenues are still falling there's no clear indication yet that the world needs more BlackBerry phones. He has an ambitious plan but he has yet to show that his software will start delivering hundreds of millions of dollars in in new revenues.
This was a company that had $20 billion in revenue and changed the way we communicated. It's not likely we'll see that lightning strike again.


Previous:   A Tech Boom Aimed at the Few, Next:  Up to 1.1 Million Customers Co