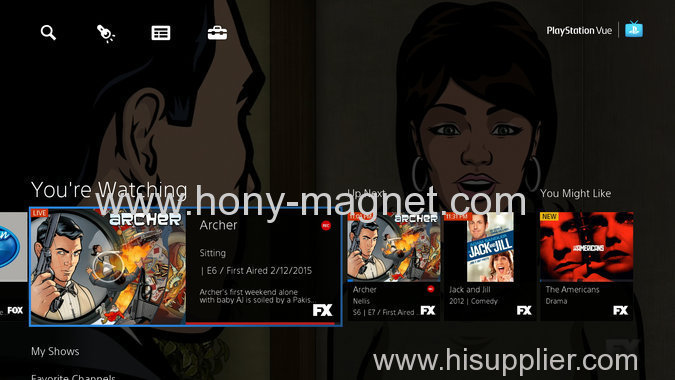 Television fans who want to break free from a traditional TV subscription now have more options than ever to pay for what they want to watch, and how they want to watch it.
But all the choices will most likely force viewers to make more choices, too — deciding what they value most and what they can live without. And they might need a calculator to determine whether their monthly bills will rise or fall.
On Wednesday, Sony added to the flood of new offerings with the introduction of its PlayStation Vue web-based streaming TV service, which offers a bundle of channels along with a personalized, searchable approach to watching live and on-demand television.
For $49.99 a month, subscribers can access more than 50 channels, including CBS, Fox and NBC, and cable channels such as USA, TBS, Fox News and Discovery. Special features include the availability of the previous three days of popular programming and personalization features based on a user's viewing habits.
The service, aimed at gamers and a younger demographic in general, will initially be available only to owners of the PlayStation 4 and PlayStation 3 consoles in New York, Chicago and Philadelphia. Eventually, it is expected to be available on the iPad and in other United States cities. Disney-owned networks, including ABC, ESPN and the Disney Channel, are not part of the service. With the introduction of the PlayStation Vue, Sony joins a growing number of media, tech and telecom companies racing to release web-based TV offerings that challenge the entrenched cable and satellite business. Those new services include live, on demand and other à la carte streaming options, often in sleeker interfaces than the typical cable offering.
"It's a revolution," said John Hendricks, founder and former chairman of the television group Discovery Communications, who on Wednesday unveiled Curiosity Stream, a new subscription-based nonfiction streaming service. "There are some seismic shifts that will occur."
The new services from Sony, Apple, Dish Network, HBO and others are aimed at a growing number of people who pay for Internet but do not subscribe for television. Some are so-called cord cutters, who have canceled their subscriptions to cable or satellite services, and others are "cord nevers," who never subscribed in the first place.
This group watches programs via on-demand streaming services like Netflix, Amazon, YouTube and now, potentially, the new live streaming options. The number of households in the United States paying for broadband but not television was 10.6 million in the third quarter of 2014, up 16 percent from the same period in 2012, according to the research firm SNL Kagan.
Viewers seeking a discount on their cable TV bill — which SNL Kagan puts at an average of $90 a month — can now pay $20 a month for Dish's Sling TV service, which offers about 20 channels in its core package, including ESPN, TBS, the Disney Channel and AMC. For an extra $5 a month, subscribers can add sports, lifestyle and children's programming packages. That service is now available across an array of devices.
Apple is also readying a lower-cost service that would offer a bundle of channels smaller than a typical cable offering. While no deals have been made and pricing details remain unclear, industry executives said a monthly subscription was likely to cost $20 to $30. The service would be available only on Apple devices.
With lower prices, though, come fewer channels. "You will save some money, but you will probably lose more choice," said David Bank, an analyst with RBC Capital Markets.
Sling TV, for instance, does not offer broadcast networks. (The broadcasters ABC, CBS, Fox, NBC and PBS, however, along with several other networks, are available free via high-definition antennas that cost about $25.)
For the Apple service, Comcast and its NBCUniversal entertainment group have not been involved in the latest round of discussions, and NBC, USA, Bravo and other networks would be excluded from its offering.
Indeed, the new services represent a careful balancing act on behalf of media companies.
Television groups sell a bundle of television networks to cable and satellite companies for billions of dollars a year. In turn, the cable and satellite companies package those networks together for subscribers.
While television networks do not want to upset that equation, they are eager for the new revenue that the streaming services will provide. They are also aware that they need to meet the viewers where they are watching — and that, increasingly, is online.
Consumers may find that the cost of à la carte choices can add up quickly and approach their monthly cable bills.
Subscriptions to Sony's service will start at $49.99. Add in other options — $20 a month for Sling TV, $14.99 for HBO's stand-alone streaming service and $7.99 a month for Netflix — and the savings start to disappear.
Yet viewers increasingly are seeking not only a discount on their cable bill but also more choices to pay for what they want, analysts said.
"The reality is, each individual service is not all that important, but when you start to layer lots of different options together, you have the ability to piece together your own bundle," said Rich Greenfield, an analyst with BTIG Research.
"I don't think it is about saving money as much as it is about empowering consumers to build the experience you want."


Previous:   Bill Would Limit Use of Studen Next:  Vivek Wadhwa, Voice for Women