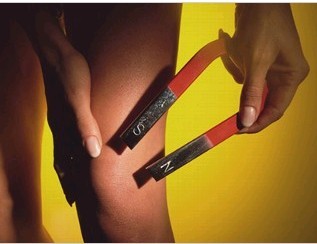 A belief in the healing power of magnets has been around since ancient Greece, leading to a $5 billion a year worldwide industry that supplies millions of believers with magnets for everything from arthritis to cancer to depression.

That's despite the fact that numerous scientific studies have been either inconclusive or unable to find evidence to support the claims of their healing power.
Until now.
New research at the University of Virginia shows that there is at least some truth to the oft-cited claim that magnets can increase the flow of blood, thus providing more oxygen and nutrients to injured tissue. Researchers have shown that a mild magnetic field can cause the smallest blood vessels in the body to dilate or constrict, thus increasing the blood flow and suppressing inflammation, a critical factor in the healing process.
So far, the findings are based on experiments with rats, but the researchers hope to begin human clinical trials in the near future, although that could prove to be a major challenge.
What sets this work apart from most research into the so-called healing effects of magnets is the fact that the researchers were able to quantify their results by measuring the changes in the blood vessels to determine the impact on inflammation.
"It's the first direct measurements that show the reduction in swelling," said Thomas Skalak, chairman of biomedical engineering at the university, who reported on his work in the American Journal of Physiology. Skalak and a former student, Cassandra Morris, have been trying to nail down the effects of magnetism for several years now.

Their findings do not lend credence to the wild claims of many manufacturers of magnetic cure-alls. Instead, their work was very precisely focused on the claim that magnets can increase the flow of blood.
"We wanted to find out if that was true," Skalak said in an interview.
The researchers used anesthetized rats for their work. The rats' paws were treated with inflammatory agents to simulate tissue damage, and a small magnet, about 10 times more powerful than a basic refrigerator magnet, was attached to their paws. The swelling was reduced by about 50 percent, apparently because the magnetic field changed the diameter of the blood vessels. The magnet only had to remain in place for 15 to 30 minutes. If the researchers waited until after the paw was fully inflamed, the magnet had no effect.!!!!


Previous:   The Reality of Supply & Demand Next:  Magnetic Therapy !!!