Demand for iPhone Drives Apple Profit, but Forecast Is Muted 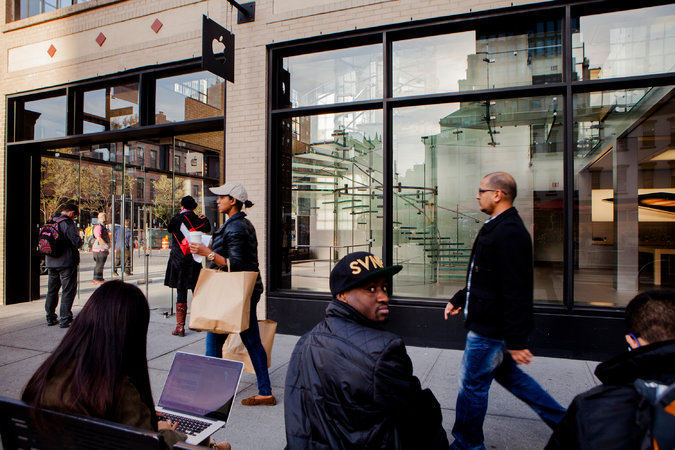 Apple on Tuesday turned in another quarter of enviable revenue and profit growth, fueled by sales of the iPhone. But the results raised a perennial question for the world's most valuable company: How can it keep its growth streak alive?
The issue was stoked by Apple's muted forecast for its all-important holiday quarter, as well as the unwillingness of Timothy D. Cook, the company's chief executive, to go into detail in an earnings conference call about how Apple plans to rev up sales next year. Over all, Apple posted a profit of $11.1 billion for its fiscal fourth quarter, up 31 percent from a year ago. Revenue was $51.5 billion, up 22 percent from last year. The results exceeded Wall Street estimates.
Yet while the performance was bolstered by sales of the iPhone — Apple said that it sold 48 million iPhones in the quarter, up from 39 million in the same period last year — the company was more cautious about sales for the key holiday sales period.
Apple projected revenue of $75.5 billion to $77.5 billion for the end-of-year quarter. While the sheer numbers are huge, the low end of the forecast fell below Wall Street estimates and would amount to anemic growth of less than 4 percent from a year ago. The last time Apple's quarterly sales fell below 4 percent was in mid-2013. When asked on the earnings call about Apple's growth prospects in 2016, Mr. Cook also said, "We don't guide beyond a quarter."
Apple's stock price, which had initially risen after the earnings results, later ended up flat.
The growth question is a quandary created by Apple's own success. The company has gotten investors accustomed to double-digit growth rates and enormous profit. That sets a high bar for Apple to clear each time and creates tough comparisons to beat later. Apple's holiday quarter last year was enormous, driven by the unveiling of the larger-screen iPhone 6 Plus, analysts said, making it difficult to compare to this time around.
To keep up this kind of growth, analysts said Apple had only a few levers to pull: Attract more first-time customers, get more people to switch from rival Android-based phones and continue to grow in China.
"We didn't get great visibility into the central question that we have about Apple," said Toni Sacconaghi, an analyst at Sanford C. Bernstein. "Can the iPhone grow in fiscal 2016?"
Mr. Cook for the most part shrugged off the growth question. In the conference call, he said Apple's full fiscal year revenue growth was equivalent to that of almost 90 percent of the companies in the Fortune 500. Apple delivered "a strong finish to a very strong year," even with a strong dollar that has forced the company to raise prices in many of its markets around the world, he said.
Apple is going into 2016 with a full slate of refreshed products. In late September, the company introduced its newest iPhone models, the 6s and 6s Plus. It also announced a larger iPad, the iPad Pro, and will begin shipping a new Apple TV this week.
While the iPhone continues to grow, the iPad has been facing declines. For the fiscal fourth quarter, Apple said iPad sales dropped 20 percent from a year ago, making it the seventh consecutive quarter that sales of the tablet have slipped. The company is increasingly positioning the iPad as a business device.
The company did not break out sales of the Apple Watch, which debuted in April. But the category called "other products" — which includes the watch — posted $3 billion in revenue in the quarter, up from $2.6 billion in the previous quarter, which was the first quarter that included sales of the device.
Ben Bajarin, an analyst at Creative Strategies, said that the numbers for the "other" category were in line with his expectations, and implied somewhere between 3.5 million and four million watches were sold over the quarter.
One of Apple's fastest-growing markets — China — continued to grow. Sales in the region that Apple calls Greater China jumped 99 percent in the quarter to $12.5 billion. The region remained the company's second-largest market after the Americas, accounting for 24 percent of sales in the quarter, compared with 13.7 percent a year ago. Investors have been scrutinizing the China business given that the country has been cutting interest rates to shore up a slowing economy.
Luca Maestri, Apple's chief financial officer, also told investors that the company had $206 billion in cash, up $3 billion from last quarter, and that 91 percent of that money was held outside of the United States.
Apple also said that it would pay investors a cash dividend of 52 cents a share. Over the last few years, Apple has taken advantage of low interest rates to borrow billions of dollars that it has redistributed to shareholders in the form of dividend payments and stock buybacks.


Previous:   New Mobile Search Start-up Foc Next:  Lease a Smartphone or Buy It?