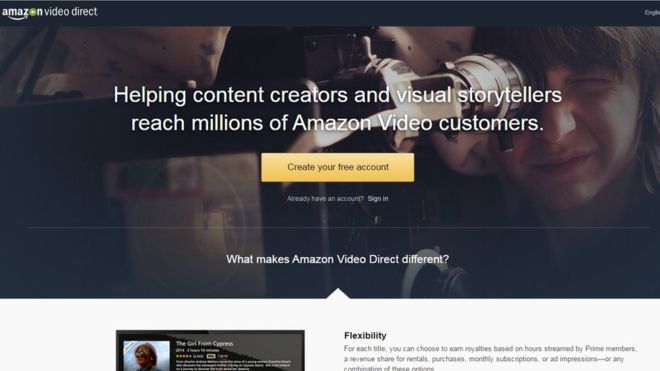 Online retail giant Amazon has launched an online video service to rival Google's YouTube.
Amazon Video Direct will allow users to post videos and earn royalties.
Viewers can rent and buy content or watch it for free with adverts. An ad-free version is offered to Amazon Prime members - a subscription service with other benefits.
Initially, videos will be viewable in the US, Germany, Austria, Japan and the UK.
The firm already offers access to professional TV shows and films via Prime Video, a rival to Netflix.
It also streams user-generated clips about video games via Twitch.
"There are more options for distribution than ever before and with Amazon Video Direct, for the first time, there's a self-service option for video providers to get their content into a premium streaming subscription service," said Jim Freeman, Vice President of Amazon Video
"We're excited to make it even easier for content creators to find an audience, and for that audience to find great content."
The news comes barely a month after online talent firm Fullscreen launched its own subscription video platform.
Previously the firm had published content on free platforms like YouTube, Instagram and Snapchat.
YouTube offers an ad-free subscription service of its own - YouTube Red - which costs $10 per month.

There's no shortage of places to watch video online, and Amazon is already a major player.
But what it's trying to do here poses a lot of questions.
How is this new idea different from YouTube? How do you beat the world's biggest video site at its own game without, on the face of it, offering any extra incentive to post or view content?
Unless, of course, Amazon does.
It may need to woo big name content creators over to the new platform with lucrative offers. But that's an expensive proposition and one that will take a long time to come to fruition, if at all.
Vimeo, Ted, Vine, Funny or Die and other popular video sites have found success by attacking a niche. It's hard to see what Amazon Video Direct's is here.


Previous:   3 surprising uses for old tech Next:  In the Apple Case, a Debate Ov