Filters That Add a Dash of Dazzle to Smartphone Photos 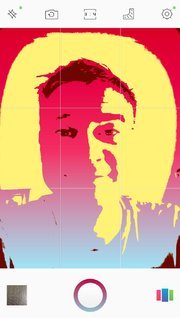 When I learned about photography years ago, one of my favorite tricks with the camera was to use a filter — perhaps a color gel or a diffuser — to add a special effect to the final photograph.
Now I can do the same thing on my smartphone, thanks to photo filter apps. Many of the apps are badly made, but we have sorted through some that are worth trying.
The Colorburn app, which is $1 on iOS, is my favorite photo filter app because of its professional design and comprehensiveness. The app provides more than 1,000 filters and effects, including different color filters that can add purple, red, green and other tones to images. It also lets you add stripes or segments of different tones in different patterns, so your photos can go Warhol, 1970s, vintage or sci-fi.
Colorburn works best when you use the camera system in the app to take your photos, because doing so offers a chance to see the effect live on your camera screen and tweak it or select a different effect. The app also works on photos you've already snapped, either with your phone's built-in camera or a different photography app.
Among my favorite Colorburn features are image editing for contrast and cutout filters that let you frame your photo in a square, a heart or another shape. Extra filters and effects are available via in-app purchase for $1 or more. Controlling the individual effects is easy thanks to the app's clear editing controls.
Colorburn's downside? There is so much choice in filters and effects that mastering its many menus and controls and deciding which of the 1,000-plus image options you want to use can be difficult.
Infltr is another iOS image filtering app with a huge number of effects. But this app works differently from Colorburn: Instead of dialing through a menu that offers a choice of filter colors and effects, you swipe your finger over the screen, and where you tap and swipe determines the effect you see. The app has a live-shooting mode so you see the filters as you take the photo, or you can edit previous snaps.
Infltr's quirky filter interface really influences how you use it. Because it reacts to swipes so quickly and you can't fine-tune each effect, it forces you to swipe to find a great look and to snap your photo quickly. This means you may end up trying filters that you would normally not choose in a photo app like Instagram.
Some reviewers lament the lack of fine control over each special effect in Infltr. The app also specializes mainly in colored filters instead of more eye-catching ones like vignetting and color inversion. It costs $3.
If you're the kind of phone photographer who wants more control over image edits, check out the Pixlr app, which is free on iOS and Android.
This app has an interface with bold, clear icons and controls. Its filters are organized into sections like "artmodern," "color" and more, and each filter is previewed with a little on-screen icon. The preview helps you choose how bold the final result is with a simple slider. Unlike some rival apps, Pixlr also allows you to apply the filter over the whole image or only to particular regions that you indicate by drawing on-screen.
Pixlr also has comprehensive photo editing features like red-eye removal, text overlay and more. The app is supported by ads, but if you're annoyed by e pop-ups, they can be removed by paying $2.
Filterloop, a free iOS app, is another fabulous option. It has a huge array of color and effect filters that you can layer on top of one another for extreme effects. Those effects include fake light leaks and grain for some really retro images. Filterloop comes with a reasonable number of built-in filters and has its own store that sells many filter bundles for $1 or $2.
Android users have a strong filter app option in the form of Cymera. This app has a professional-looking interface that is similar to Pixlr's, and has 130 different filter effects, as well as other special image adjustments to make it look as if your photos were taken on a Lomo camera or through a fish-eye lens. Cymera has many other features to help edit your photos, including adding fake makeup effects. It's free and also available on iOS.
Quick Call
Microsoft's personal assistant, Cortana, has been available on iOS for a while, but the app has just had a big upgrade. Cortana, which is free, now is more stable, loads faster, supports the 3-D touch option on newer iPhone 6s devices and has a new monthly reminder feature. Microsoft has also upgraded its Bing search apps for iOS and Android to add a few extra features, including a bar code scanner for price comparisons on Android.