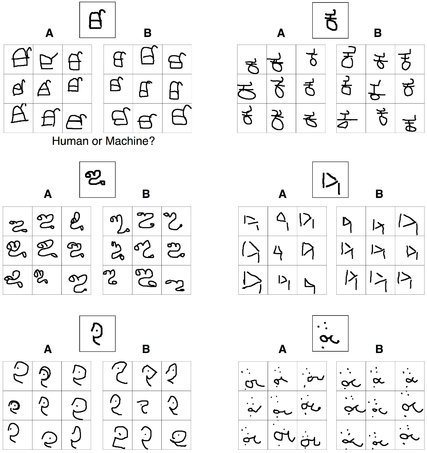 Computer researchers reported artificial-intelligence advances on Thursday that surpassed human capabilities for a narrow set of vision-related tasks.
The improvements are noteworthy because so-called machine-vision systems are becoming commonplace in many aspects of life, including car-safety systems that detect pedestrians and bicyclists, as well as in video game controls, Internet search and factory robots.
Researchers at the Massachusetts Institute of Technology, New York University and the University of Toronto reported a new type of "one shot" machine learning on Thursday in the journal Science, in which a computer vision program outperformed a group of humans in identifying handwritten characters based on a single example.
The program is capable of quickly learning the characters in a range of languages and generalizing from what it has learned. The authors suggest this capability is similar to the way humans learn and understand concepts.
The new approach, known as Bayesian Program Learning, or B.P.L., is different from current machine learning technologies known as deep neural networks.
Neural networks can be trained to recognize human speech, detect objects in images or identify kinds of behavior by being exposed to large sets of examples.
Although such networks are modeled after the behavior of biological neurons, they do not yet learn the way humans do — acquiring new concepts quickly. By contrast, the new software program described in the Science article is able to learn to recognize handwritten characters after "seeing" only a few or even a single example.
The researchers compared the capabilities of their Bayesian approach and other programming models using five separate learning tasks that involved a set of characters from a research data set known as Omniglot, which includes 1,623 handwritten character sets from 50 languages. Both images and pen strokes needed to create characters were captured.
"With all the progress in machine learning, it's amazing what you can do with lots of data and faster computers," said Joshua B. Tenenbaum, a professor of cognitive science and computation at M.I.T. and one of the authors of the Science paper. "But when you look at children, it's amazing what they can learn from very little data. Some comes from prior knowledge and some is built into our brain."
Also on Thursday, organizers of an annual academic machine vision competition reported gains in lowering the error rate in software for finding and classifying objects in digital images.
"I'm constantly amazed by the rate of progress in the field," said Alexander Berg, an assistant professor of computer science at the University of North Carolina, Chapel Hill.
The competition, known as the Imagenet Large Scale Visual Recognition Challenge, pits teams of researchers at academic, government and corporate laboratories against one another to design programs to both classify and detect objects. It was won this year by a group of researchers at the Microsoft Research laboratory in Beijing.
The Microsoft team was able to cut the number of errors in half in a task that required their program to classify objects from a set of 1,000 categories. The team also won a second competition by accurately detecting all instances of objects in 200 categories.
The contest requires the programs to examine a large number of digital images, and either label or find objects in the images. For example, they may need to distinguish between objects such as bicycles and cars, both of which might appear to have two wheels from a certain perspective.
In both the handwriting recognition task described in Science and in the visual classification and detection competition, researchers made efforts to compare their progress to human abilities. In both cases, the software advances now appear to surpass human abilities.
However, computer scientists cautioned against drawing conclusions about "thinking" machines or making direct comparisons to human intelligence.
"I would be very careful with terms like 'superhuman performance,' " said Oren Etzioni, chief executive of the Allen Institute for Artificial Intelligence in Seattle. "Of course the calculator exhibits superhuman performance, with the possible exception of Dustin Hoffman," he added, in reference to the actor's portrayal of an autistic savant with extraordinary math skills in the movie "Rain Man."
The advances reflect the intensifying focus in Silicon Valley and elsewhere on artificial intelligence.
Last month, the Toyota Motor Corporation announced a five-year, billion-dollar investment to create a research center based next to Stanford University to focus on artificial intelligence and robotics.
Also, a formerly obscure academic conference, Neural Information Processing Systems, underway this week in Montreal, has doubled in size since the previous year and has attracted a growing list of brand-name corporate sponsors, including Apple for the first time.
"There is a sellers' market right now — not enough talent to fill the demand from companies who need them," said Terrence Sejnowski, the director of the Computational Neurobiology Laboratory at the Salk Institute for Biological Studies in San Diego. "Ph.D. students are getting hired out of graduate schools for salaries that are higher than faculty members who are teaching them."