Google Glass May Have a Blind Spot, Study Says 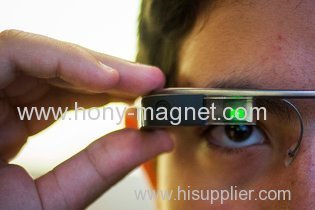 Is that an email in your eyes, or are you about to get hit by a truck?
Google's "Google Glass" smart glasses blur the lines between life in the real world and life in a computer, allowing users to snap pictures with a blink or send emails with their voice — all while running or biking and never having to look down at a screen. But according to a research letter in The Journal of the American Medical Association, the device may also create a blind spot on the right side.
The letter, published in Tuesday's issue of JAMA, was based on a tiny study — performed on three people — in April. The lead author was Tsontcho Ianchulev, an ophthalmologist and professor at the University of California, San Francisco, who used a standard vision test to compare peripheral vision with regular eyeglasses versus Google Glass.
"The device created a clinically meaningful visual field obstruction in the upper right quadrant," the paper said.
The study did not say anything about Glass's function, nor did it address whatever effects there might be from having emails and other data flash constantly in front of one's eyes. In fact, the glasses were turned off for the experiments on which the paper is based. "We didn't look at the software or any of that," Dr. Ianchulev said.
In essence, Dr. Ianchulev's study discovered that Google Glass is kind of bulky, and that when people affix a bulky computer to their faces, it makes it a little harder to see. This might seem self-evident to anyone who has worn the glasses, which have a right-side casing that holds its electronic guts. Google suggested as much in an emailed statement.
"Put on your favorite shades, glasses, baseball hat, or hoodie, and you'll quickly see that this study tells us what we already know; wearing something on your face or head may affect your peripheral vision," the statement said. "From the beginning, the Glass team has worked closely with a range of experts to develop a device that is safe for use, and after extensive study they have not found any safety issues when it's used correctly."
Google has been a bit exasperated by all the negative attention on Glass, which has been pilloried everywhere from tech blogs to "Saturday Night Live." The founder of Luxottica, which has a deal with Google to make frames for Glass, said he would be "embarrassed" to wear the glasses, though he said "it would be O.K. at the disco."
Dr. Ianchulev said he did not go into the experiment with ill will. He is actually a bit of a gadget enthusiast, he said, and bought Google Glass a few months back. One day he was wearing them while driving in the San Francisco Bay Area and had a close call on his right side.
"That serendipitously illustrated to me that when I wore Google Glass, the frame was prominent on the right side," he said, which blocked his vision.
Dr. Ianchulev emphasized that the study was very small, which is bad for science, but good for ethics, because a corporate interest didn't pay for it. It was, he said, just an initial look into a potential problem. "The impact of Google Glass on the visual field and daily activity should be understood more, and other wearable devices for that matter," he said.
Google said it has done several of its own studies. This post, by one of its medical consultants, noted that when one eye is partially obstructed, the other eye makes up for it.
"The right eye field might have some blockage, but the other eye compensates thanks to overlap in the central field of view," said Dr. Eli Peli, a Harvard professor of ophthalmology, who wrote the post.


Previous:   Keep Warm and Carry On Next:  Hoverboard? Still in the Futur